Beware of infringement when using others' trade marks in hashtags (#) online

Posted by George Huang
2 June 2022
0
IP laws and practice (includes legislation, practice changes, case-law from around the world), IP news and developments
Hashtag – a word, phrase, or sentence prefaced by the hash symbol ‘#’ – is a metadata tag that helps users search for and click on content of a common topic online. A revolutionary tool that boosts the reach of certain information, it has gained a critical role in online marketing and is now an essential part of various social media and shopping websites. For example, one of the hashtags used in FICPI’s following LinkedIn post ‘#intellectualproperty’ suggests that the post is intellectual-property related and also leads users to other posts with the same hashtag on the platform by a simple click. 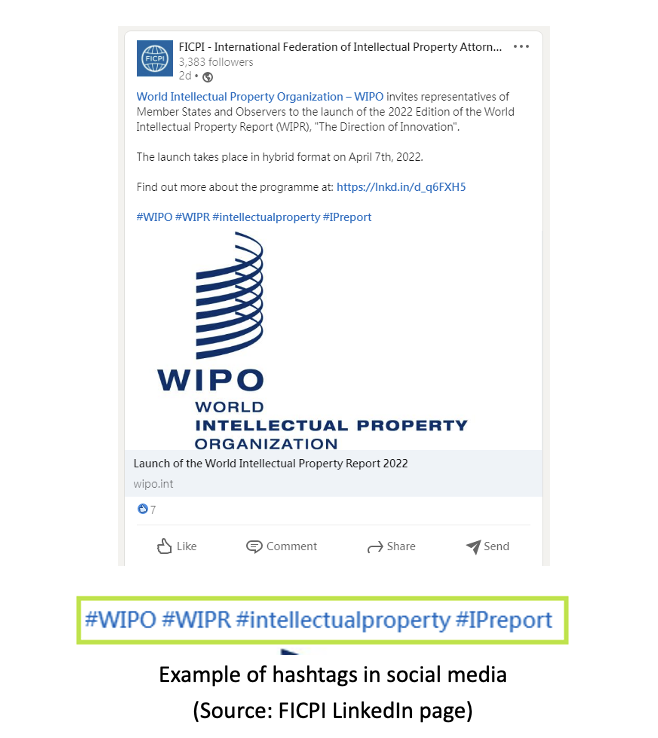 While ‘hashtag trade marks’ consisting of the hash symbol ‘#’ and one or more words are accepted by most trade mark offices, for example, McDonald’s successfully registered ‘#McDstories’ with the USPTO, whether using other parties’ registered trade marks as hashtags constitutes trade mark use and thus infringement has become a new concern. Courts in East Asia have different perspectives on this issue. The Taiwan Intellectual Property and Commercial Court (Taiwan IP Court) ruled with regard to this matter in 2019 and 2020, opining that using registered marks as hashtags is not ‘trade mark use’. The Japan Osaka District Court made a converse decision in 2021 (Reiwa 2nd Year Wa No. 8061 Judgement), which is one of the first cases in Japan where tagging others’ registered trade marks for marketing purposes is found to constitute trade mark infringement.

QQBOW is a Taiwanese clothing brand managed by Xingphongge LLC (the plaintiff). An individual vendor selling apparels and accessories on the e-commerce platform, Shopee, was accused of trade mark infringement for using ‘#QQBOW’ for marketing purposes. The plaintiff asserted that the defendant‘s action had infringed its registered trade mark ‘QQBOW’ and had caused confusion between their goods among the relevant consumers. 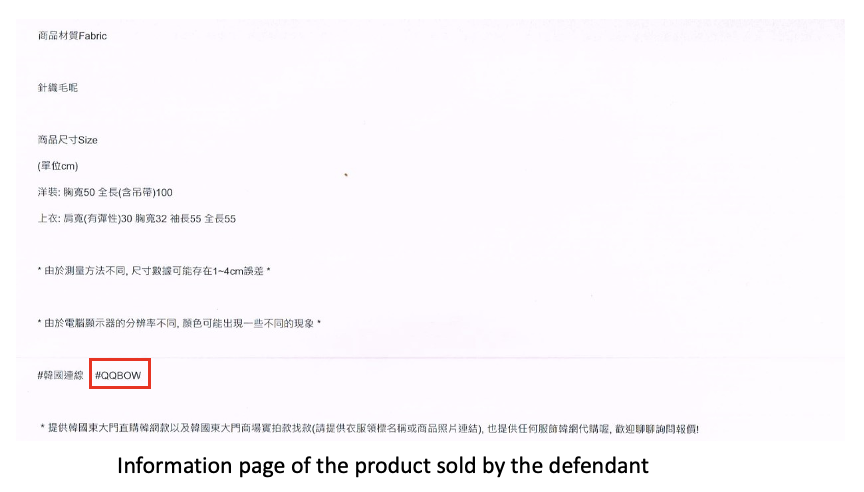 Opinion of the IP Court

The court of first instance noted that ‘#QQBOW’ is the hashtag form of the trade mark ‘QQBOW’. The fact that hashtags direct the user to posts with the identical hashtag on the same platform/website is well-known by users of the platform. Relevant consumers will not perceive this hashtag as a trade mark, and thus ‘#QQBOW’ is not trade mark use. Dissatisfied with the court decision, the plaintiff appealed.

The appeal court upheld the first-instance decision and dismissed the appeal, affirming that using a registered mark as a hashtag is not ‘trade mark use’. The court further ruled that the defendant’s action constituted fair use according to Subparagraph 1 Paragraph 1 Article 36 of the Taiwan Trade Mark Act, and therefore should not be bound by the plaintiff’s trade mark right.

MARECHAL INTERNATIONAL CO., LTD. (‘MARECHAL’, the defendant) used hashtags ‘#lightweight’ and ‘lightweightwheels’ in a few posts promoting one of its products on their Facebook page. The owner of the trade mark ‘Lightweight’, OP BICYCLE CO., LTD. (the plaintiff) is the exclusive agent of the high-end bicycle wheel set brand ‘Lightweight’. OP BICYCLE asserted that such action had caused the relevant consumers to mistake MARECHAL for the authorised agent of ‘Lightweight’, provoking likelihood of confusion among the relevant consumers.

Opinion of the IP Court

The court comprehensively compared the posts on MARECHAL’s Facebook page and discovered that although ‘#lightweight’ and ‘lightweightwheels’ were used on these posts, the posts also contained detailed information of the manufacturers and specifications of each component and pictures of the components, ensuring that the consumers understand the products thoroughly and will not be confused. Similar to the QQBOW case, the court decided that these hashtags will not be perceived as trade marks since it is a well-known fact that the function of hashtags is connecting posts with identical hashtags on the same platform/website. Therefore, using registered marks as hashtags is unlikely to be perceived by the relevant consumers as trade marks, and is not trade mark use.

Charmantsac (plaintiff) is a Japanese fashion brand that is famous for drawstring bags and clothes, and owns the trade mark registration of ‘シャルマントサック’, the Japanese transliteration of ‘charmantsac’. The defendant in this case was found having sold more than 1,000 homemade bags on a second-hand online shopping website with hashtags ‘#シャルマントサック’. The plaintiff argued that the defendant took advantage of the fame and appeal of its brand, confusing the relevant consumers and luring them to the page of the defendant’s goods, thereby infringing its trade mark. 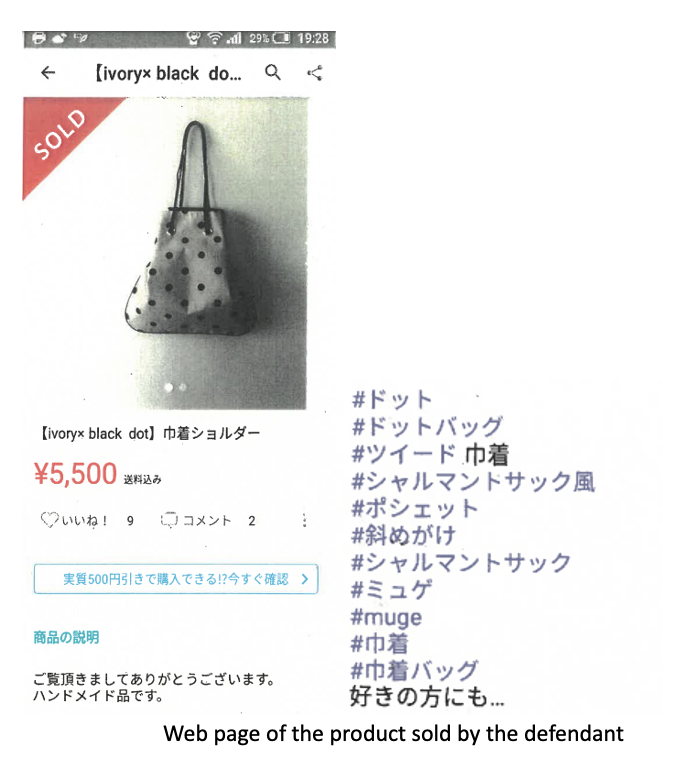 Opinion of the Osaka District Court

The plaintiff’s trade mark ‘シャルマントサック’ is not present in the title of the product page nor on the product per se. It is also stated in the description that it is a homemade product, and other descriptive information such as ‘ドットバッグ’ (dot tote bag) and ‘ポシェット’ (pochette) are included as well.

Nonetheless, as ‘#シャルマントサック’ is clearly present on the product web page, the court held that the other keywords are not sufficient to erase consumers’ impression that they are Charmantsac products. The defendant’s use of the hashtag is therefore found to infringe the plaintiff’s trade mark as it provided consumers with a misleading indicator for identifying the source of goods and distinguishing the products.

Hashtags have now become an indispensable tool for businesses navigating the competitive realm of ecommerce. Whether using registered trade marks as hashtags is trade mark use is an emerging issue due to the growth of digital marketing. Determination of infringement varies depending on the usage of marks.

Since hashtags mainly serve the purpose of connecting similar topics on online platforms and do not possess the nature of trade marks, the Taiwan IP court held that using registered marks as hashtags is not ‘trade mark use’ after examining the content of online posts and goods related to the hashtags. The appeal court also clearly stated that such action constitutes fair use of trade mark. In contrast, the defendant in the Japanese ‘Charmantsac’ case was found liable for infringement as its use of others’ registered trade mark in hashtags for promoting its own products was likely to mislead potential consumers into believing that said products were products of the right holder.

Despite the varied determination on infringement discussed above, it should be noted that if the posts, sites or goods related to a hashtag involve wrongdoings such as selling counterfeits bearing registered trade marks or parallel importers claiming to be the authorized agent of the original manufacturer, it is likely to violate the Trademark Act or the Fair Trade Act.

The prevalence of hashtags should also be a warning for trade mark owners. Whether hashtags consisting of ‘#’ followed by a registered trade mark is considered a mere search function or trade mark use must be determined on a case-by-case basis. The conventional route of only registering a word trade mark may no longer provide the desired scope of protection. Right holders are advised to obtain registrations of trade marks including the ‘#’ symbol in order to secure an advantageous position during infringement cases.

Keep up to date with changes in the IP field through FICPI’s news and events, with the 2022 FICPI World Congress in September tackling subjects such as the use of trade marks to protect and monetise artworks, and whether artificial intelligence can be named as an inventor on a patent invention.

Independent IP attorneys bring insights and counsel from a wide external perspective and a commitment to high quality work, complying with all relevant regulations. FICPI is the only organisation exclusively for independent IP attorneys and is driven by a strong shared interest to promote common solutions and advocacy for private practice. 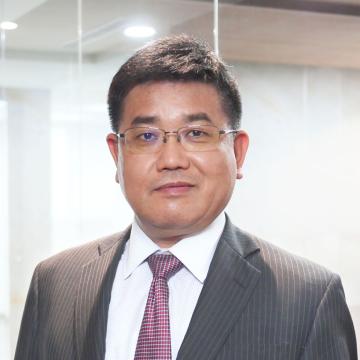 George J. H. HUANG is the Director of Wisdom International Patent & Law Office. He is the first lawyer with a solid technical background (biotechnology) to have qualified as a patent attorney in Taiwan.