Knock, knock: Who’s there? A discussion of “Straw Person” proceeding

Posted by Anil Bhole and Dr Neeti Wilson
5 December 2022
0
Several jurisdictions permit inter partes proceedings like oppositions and invalidity or expungement suits to be brought by “any person”.

This opens the possibility of initiating an action through a “straw person” entity, hiding the true identity of the opponent/challenger. The use of the straw person entity removes one impediment to a third-party challenge, and bona fide challenges to IP rights should be encouraged as a way to maintain quality of IP rights on the register.

The attorney as named straw person

The workshop “Knock, knock: Who’s there? A discussion of “Straw Person” proceeding” held on 27th September during the FICPI World Congress 2022 with speakers Anil Bhole and Neeti Wilson focused on the particular scenario in which the attorney themself is the named straw person, which is understood to be a common practice in several jurisdictions.

Our goal in this workshop was to assess risks, primarily to the profession, that might be experienced or are even inherent in the use of straw person proceedings. We touched upon both ethical issues and practical complexities in the use of these proceedings.

We suspected that these are most likely issues relating to conflicts of interest (ethical as well as business conflicts), potential adverse costs consequences to the straw person, and prejudice to the parties in the proceeding (e.g. potential lack of transferability of proceedings).

Workshop participants discussed whether benefits outweigh risks in naming oneself as the straw person, whether there are possibilities to reduce risk to the profession by legislation or private arrangements, and/or if there is a need to lobby third parties for change to effect such a risk reduction.

There was active participation by all the workshop participants. The diversity of views of the different jurisdictions and legal standings led to lively cross interaction among the participants. The various country representation made the final consensus to be even more worthwhile. The participants were from the following countries:

Almost all the participants confirmed that straw person proceedings were allowed in their jurisdiction at least at some stage of proceedings before the patent/trademark office and some of the jurisdictions allowed the same in court proceedings as well.

Risks to the profession & mitigations

The discussion led to a general consensus that there is indeed unnecessary risk to the profession if the attorney continues to name themself as the straw person.

These risks were mostly found to be around conflicts and costs awards, as mentioned above, but also the possibility of being bound to continue an action (which might not be desirable to the attorney or the client in particular circumstances) such as where there is a lack of transferability of a proceeding.

However, the group agreed that these risks to the profession can be mitigated by taking steps that include the following:

1.     Maintaining arm’s length distance with the named straw person (i.e. do not name the attorney as the straw person) in any proceeding, which should enable the attorney to avoid direct conflict issues and also to comply with any required ethical code of conduct.

2.     Establish a clear written agreement between the IP attorney and the named straw person before initiating the proceeding, for example to indemnify the attorney against any potential costs award.

These steps were recommended as guidelines to be undertaken for further study, perhaps by FICPI’s Practice Management Committee (PMC).

FICPI makes the world a little bit smaller, bringing independent IP attorneys from around the world together to connect, share knowledge and grow, through occasions such as the FICPI World Congress, as well as events such as the Open Forum and regular FICPI webinars. IP attorney members can get involved with FICPI work to promote common solutions and advocacy for private practice through FICPI Commissions and Committees. 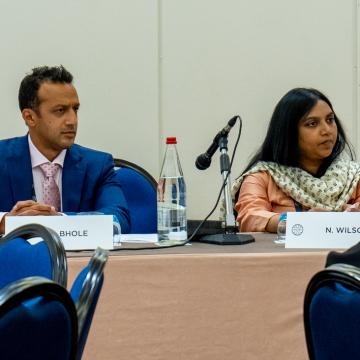 Anil Bhole is a Canadian patent and trademark agent and lawyer at Bhole IP Law in Canada. Dr Neeti Wilson of Anand & Anand in India is a member of FICPI's CET 3 International Patent Matters.